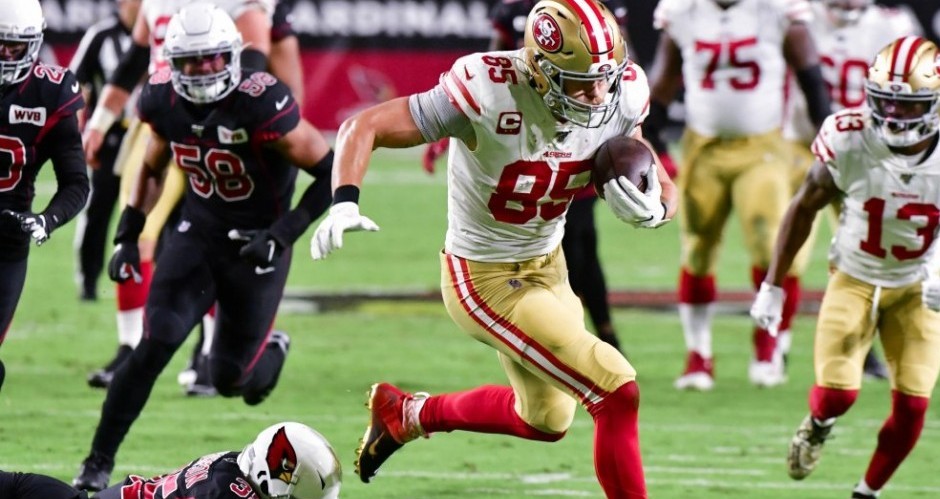 In a season that has been marked by an impressive defense, the San Francisco 49ers offense won them the game against the Arizona Cardinals.

On a short week, the defense was evidently tired, as they gave up more points in one night to the Cardinals than they did in their last four games combined.

On a night when neither the defense or the running backs were playing well, the game was put in the hands of one man: Jimmy Garoppolo. When the spotlight shined on him, he did not disappoint.

The 49ers quarterback enjoyed arguably the best game of his NFL career, finishing 28/37 with 317 passing yards and 4 touchdowns. His clutch play allowed San Francisco to convert on 11 of 17 third downs.

He threw touchdowns to four different receivers, including tight end George Kittle, who had an impressive game even while playing through multiple injuries.

The San Francisco defense, which up to the midpoint of the season has been one of the best in the league, had a tough time containing the Cardinals’ rookie quarterback, Kyler Murray. He finished with 2 touchdowns and 130.7 passer rating. Maybe it’s a good thing he stuck to football.

Heading into the fourth quarter, the 49ers were up 28-14 and looked to have the game wrapped up. However, Murray had other plans. After leading the Cardinals to a field goal, he found fellow rookie Andy Isabella for an 88-yard touchdown pass and then converted a two-pointer to make it a 3-point game with 4:53 remaining.

Unfortunately for the Cardinals, Murray never got a chance to win the game, as his defense was unable to get the San Francisco offense off of the field as Garoppolo converted two key third-down passes as the 49ers sealed the win.

On Halloween night, maybe the Cardinals defense was more focused on going trick-or-treating after the game.

At the midway point of the 2017 season, an 0-8 49ers squad dealt for the then-New England Patriot Garoppolo at the trade deadline. Exactly two years later, the team sits at 8-0. Times can change quickly in the NFL.

After a long week off, the 49ers will face the Seahawks (6-2) at home on Monday Night Football in a key divisional matchup.