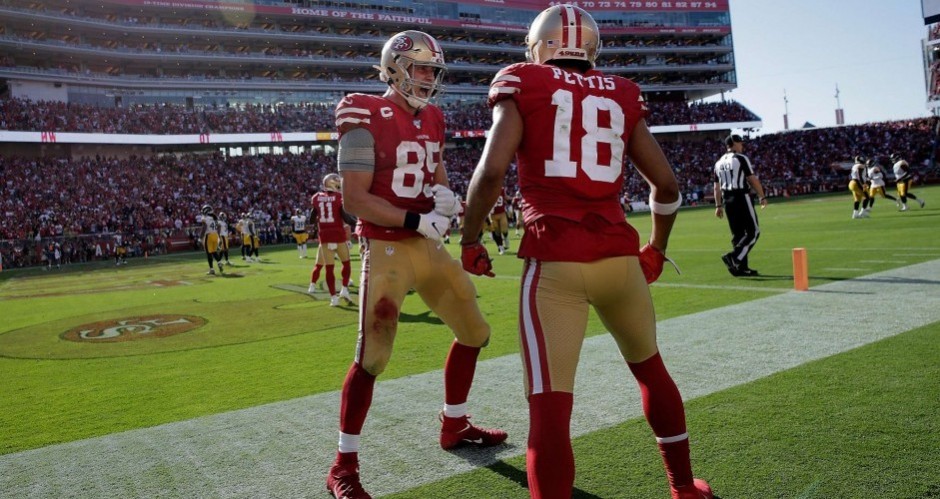 On a sloppy day for both teams, the 49ers defeated the Pittsburgh Steelers by a score of 24-20. The 49ers were able to hold on after taking the lead on a five-yard touchdown pass from quarterback, Jimmy Garoppolo, to wide receiver, Dante Pettis, with 1:15 remaining in the fourth quarter.

“We didn’t play perfect but our record’s perfect,” said 49ers cornerback Richard Sherman after the game.

In their home opener at Levi’s Stadium this afternoon, the 49ers couldn’t have started much worse offensively, as four of their first five drives ended in turnovers. Thanks largely to an aggressive defense, the 49ers were lucky to go into halftime down only 6-3.

It was a tale of two halves on offense for the 49ers, who impressed with 21 second-half points after struggling to get anything going in the first two quarters. Head coach Kyle Shanahan’s running back by committee approach continues to pay dividends for the 49ers, who topped 150 yards on the ground for the second straight week. Recent practice squad call-up Jeff Wilson Jr. found the endzone twice today, and has now scored four touchdowns in two games this season. Fantasy football fans will be angry at him for “stealing” touchdowns from the more established Matt Breida, but the 49ers are certainly happy to see him hitting pay dirt this often.

Defensively, the 49ers continue to turn heads as they held Steelers quarterback Mason Rudolph to a mere 174 passing yards, 76 of which came on a long touchdown to star wideout JuJu Smith-Schuster. In his first NFL start, Rudolph struggled to buy time to make throws, as the 49ers intimidating defensive line, led by Deforest Buckner and Dee Ford, harassed him all day. Although they only finished with two sacks, the 49ers created pressure all game long and refused to let the Steelers capitalize off of the offense’s five turnovers.

One of the few bright spots for the Steelers was recently acquired safety Minkah Fitzpatrick, who was dealt to Pittsburgh earlier this week after requesting a trade from the flailing Miami Dolphins. Fitzpatrick kept the Steelers in the game today by intercepting Garoppolo and forcing a fumble from running back Raheem Mostert. However, his new team falls to 0-3 and will be searching for answers offensively in the coming days.

The 49ers will take the win, but they understand that they are going to need to limit their turnovers to stay competitive this season.

San Francisco will remain undefeated next week, as they head into their bye in Week 4. After their week off, they will face the Cleveland Browns on Monday Night Football at home where they will look for their fourth consecutive victory.