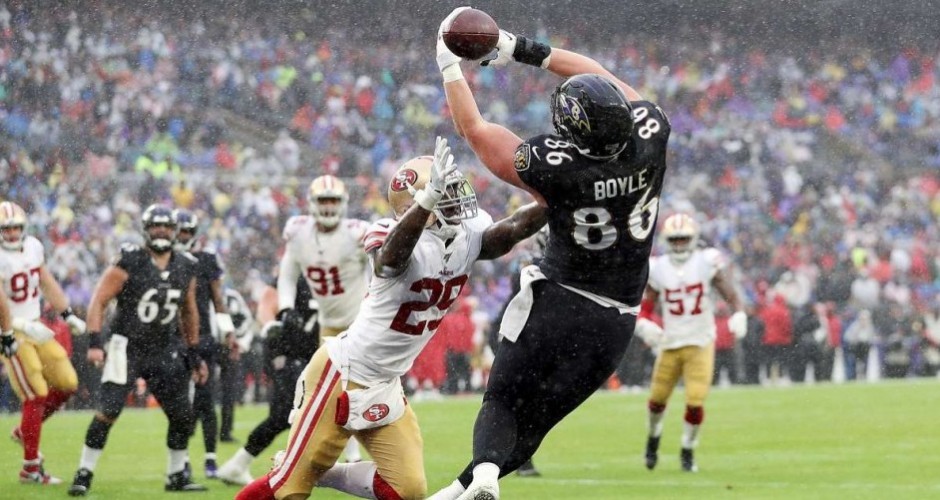 The San Francisco 49ers lost a tough game against the Baltimore Ravens on Sunday afternoon by a score of 20-17 at M&T Bank Stadium.

Things started out well for the 49ers (10-2), as they scored on their first possession by finding the end zone on a 33-yard reception on fourth down.

However, Ravens quarterback and NFL MVP favorite, Lamar Jackson, accounted for two unanswered touchdowns, one on the ground and one through the air, to put Baltimore (10-2) up 14-7. San Francisco responded with another touchdown to tie it up at 14 going into halftime.

It came down to a last-second field goal from revered Ravens kicker Justin Tucker, ironically from 49 yards out. The Ravens forced a 49ers turnover when they batted down a Jimmy Garoppolo pass at the line of scrimmage. They then proceeded to take over six minutes off the clock before nailing the kick.

Running back Raheem Mostert stood out for the 49ers this afternoon, finishing with 19 carries for 146 yards and a score. The offense struggled through the air, although that is not surprising, as the rain was coming down hard throughout the entire contest.

Even in the loss, the 49ers defense impressed. They limited Jackson to a mere 105 passing yards and held an offense that score 45 points last week to just 20. While losses are never ideal, San Francisco should still be encouraged by their performance against the Ravens.

With the loss, the 49ers’ spot in the playoff picture is up in the air. While they currently sit at No. 1 in the NFC, they would drop all the way down to No. 5 if Seattle beats Minnesota on Monday Night Football. The 49ers’ matchup against the Seahawks in Week 17 could loom large.

Meanwhile, the 49ers will worry about next week, as they head to New Orleans where they will look to get back on track as they face off against a top NFC opponent in the Saints (10-2) at the Mercedes-Benz Superdome.