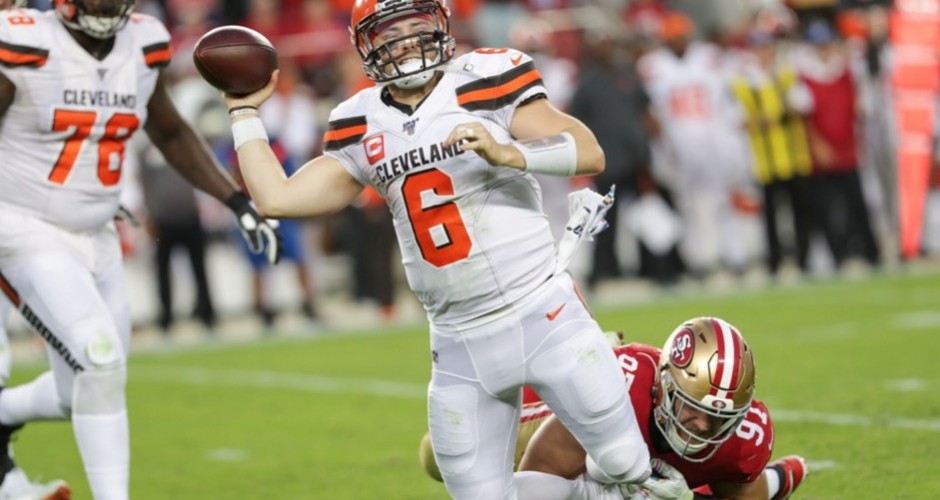 Coming out of their bye, the San Francisco 49ers silenced their doubters and answered any questions as they thoroughly dismantled the Cleveland Browns on Monday Night Football at Levi’s Stadium.

The 49ers now improve to 4-0 on the season for the first time since 1990, when Joe Montana was playing quarterback, the Fresh Prince of Bel-Air premiered on NBC, and a gallon of gas cost $1.34. In other words, it’s been a while.

The Browns (2-3), who were off-season darlings of many, never stood a chance in this contest. It probably wasn’t a good sign that at the end of the first quarter, quarterback Baker Mayfield had completed the same number of passes (one) as wide receiver Odell Beckham Jr.

Even with a roster containing several star players, Mayfield was never able to get anything going. The 49ers defensive line harassed him all night, and the spotlight proved to be too big for him at this time. He finished just 8-22 with 100 passing yards, no touchdowns, two interceptions, and a passer rating of 13.4, which was good for the lowest any quarterback has posted on MNF since 2002.

49ers first-round draft pick Nick Bosa enjoyed a breakout game at defensive end, registering two sacks on the night and making his presence felt all game long. This matchup was personal to him, as after a takedown of Mayfield to end the first half, he “planted a flag” in the ground to celebrate. Mayfield, of course, infamously planted an Oklahoma Sooners flag into the turf of Ohio Stadium after he defeated Bosa there in an upset in 2017.

“I think everybody knows what that was for,” Bosa told ESPN. “I just wanted to get payback. He had it coming.”

On the offensive side of the ball, San Francisco wasted no time, as speedster Matt Breida ran untouched for an 83-yard touchdown on the 49ers’ first play from scrimmage. Breida found the end zone again later in the first quarter when quarterback Jimmy Garoppolo hit him for a 5-yard touchdown catch.

Running back Tevin Coleman, who was returning from injury, made an immediate impact with a 19-yard touchdown run in the second quarter. Meanwhile, fan-favorite George Kittle scored his first touchdown of the year on a 22-yard pass from Garoppolo in the third quarter to put the 49ers up 28-3, and essentially end any chance that the Browns had in this game.

The 49ers join good company with the win, as they accompany the New England Patriots as the only unbeaten teams in the NFL. On a short week, the Red and Gold will look to remain undefeated against their division rival Los Angeles Rams (3-2) on Sunday at the Coliseum