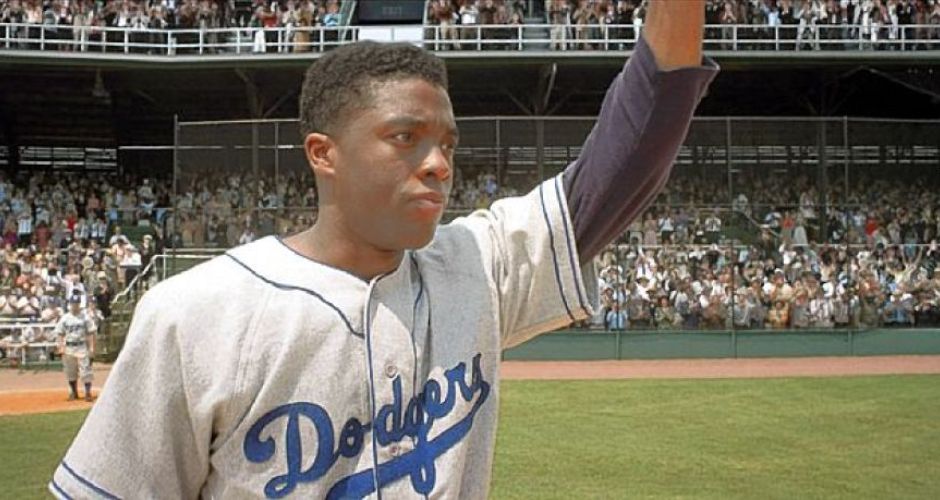 More than 65 years after his historic debut in the Major Leagues, it is pretty remarkable that “42″ is the first feature film to chronicle Jackie Robinson’s struggles and triumphs to come out after his playing career ended (“The Jackie Robinson Story” came out in 1950, which starred Robinson himself during his time with the Dodgers). So much of Robinson’s legendary breakthrough of becoming the first African-American ballplayer to play in the MLB has been so well chronicled, it leaves very little for a director to uncover for a movie. While “42″ does not reveal any new secrets of Robinson’s story, it accomplishes the goal of conveying to the audience the accuracies of an American hero’s journey.

For me, the most interesting part of the movie was the part that previously was the least publicized, which is Robinson’s time in the minors with the Montreal Royals. An extremely powerful part of the movie occurs at a gas station in Missouri, as the Royals are on their way to Chicago. The team gets off the bus and the station attendant begins to pump gas into the team bus as Robinson heads towards the bathroom. He is informed by the worker that because he’s black, he can’t use the white-only bathroom. In an act of defiance, Robinson tells the worker to stop pumping gas, only to have the worker give in and let him use the bathroom. This is a great example of a constant theme throughout the movie; that Robinson was mentally and morally strong enough to be the African-American player to take this leap.

Jackie Robinson is played by Chadwick Boseman, who before this had little movie and more TV acting experience. Boseman performs best when acting as the strong and confident Robinson, both on and off the field. His performance is pretty believable when on the diamond, where Robinson was known to be extremely confident, even bordering on cocky. The scene where Robinson goes into the dugout tunnel and breaks his bat over his anguish of being verbally abused is very dramatic, and Boseman’s portrayal as Robinson with Branch Rickey is a turning point in the movie.

Harrison Ford, who reportedly did not know much about baseball before being cast as Dodgers owner Branch Rickey, did a solid job of displaying the conviction with which Rickey went about his decision to sign and play Robinson. The real-life Rickey, just as was portrayed by Ford in the movie, had to continuously remind Robinson that he could under no circumstances fight back or show weakness. Ford’s dialogue, especially in the start of the movie, hits home with the audience, and does a convincing job conveying the amount of importance Rickey put on Robinson and the struggles he knew he would endure.

The film’s greatest strengths are it’s historical accuracies and emphasis placed on the relationships that existed between the characters. The director, Brian Helgeland, would have done Robinson a disservice by including elements that didn’t actually exist. The detail in which the baseball scenes were written, while not necessarily word-for-word renditions, served the purpose of keeping the day-to-day struggles on and off the field for Robinson compelling. The dynamic of the Dodger locker room was strongly emphasized as well. For example, Dodger manager Leo Durocher’s (Christopher Meloni) tirade in front of the team explaining Robinson’s place on the team is a perfect snapshot of the different views those on the team had of Robinson leading up to his debut.

My criticisms of the movie stem mostly from a predictable plot line and weak, one might say cheesy, dialogue throughout its entirety. When I first saw the trailer, it made me think the movie from start to finish would be hard-hitting and be filled with engaging dialogue. However, most of the lines from the trailer, including Rickey’s “I want a player who’s got the guts not to fight back” and Robinson’s “I’m not going anywhere! I’m right here”, seem out of place and forced in their actual scenes. As far as the predictability is concerned, a person with no baseball background could have foreseen the ending 15 minutes into the movie. The movie didn’t really reveal any details that were previously unknown, outside of the half an hour spent on Robinson’s time with the Royals. Some new facts about Robinson’s Major League tenure or those involved with his story would have been refreshing.

Overall, this movie served its purpose. It accurately chronicled the story of Jackie Robinson from Negro League star to Major League Baseball and American icon. While certainly not a future Academy Award nominee for Best Film, “42″ is a must-see for any baseball fan, and especially in light of NBA player Jason Collins coming out as gay this past week, goes to show how far we have come as a society since 1947.