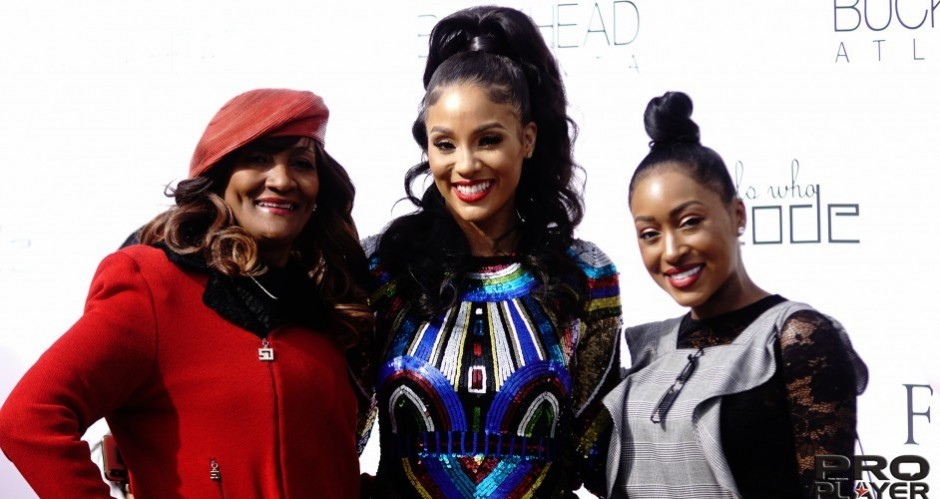 The Off the Field Players’ Wives Association is an organization formed by active and retired football players wives. Together, these women raise money to support several non-profit organizations, hospitals, and other community outreach programs. Every year the wives hold a fashion show with proceeds designated to a chosen cause. This year the cause would support Girls Who Code, a program that extends to all 50 states designed to close the gender gap in technology. Girls Who Code provides course programs, a community of support, and pathways for career opportunities for girls interested in computer sciences.

Pro Player Insiders was lucky enough to be invited to the fashion show which allowed us to meet an extraordinary group of strong women empowering each other and being supported by their loved ones.

The event began with a red carpet that eventually led guests indoors for drinks and hors d’oeuvres. Co-Founder, Sherice Brown, wife of Tim Brown, was gracious enough to speak with us about her preparation before the big event. Brown focused on preparing for the event by doing a 21-day vegan cleanse, something she says helps the body and mind. “On the inside it’s a spiritual cleanse as well, so getting my mind prepared for such an amazing event,” Mrs. Brown said. She expressed feeling blessed by the event reaching its 18th consecutive year – each year being sold out.

As for Romonda Jordan, who is also one of the co-founders and wife of Randy Jordan, she uses prayer, extra exercise, and plenty of hydration to get herself ready for an event such as this. Jordan thanked the city of Atlanta for their support and for the speed of ticket sales. She said the fashion show had been sold out for weeks! Brown wishes the event could have been outdoors and included more of the public, perhaps something to look forward to for a future event.

And what’s a fashion show without the Bettis’ – Trameka and Jerome. Jerome admits that he’s learned a lot about fashion from his wife. He’s gone from the baggy suit to the custom-fit and when they go out they make sure to compliment each other’s look. Trameka spoke about the Girls Who Code cause and how grateful she is to have outstanding support from everyone, including her husband. “Well, they’ve always supported us through the years and it’s right that we stand by them in the background as they do something that’s very important, and we support them,” Jerome said.

Current NFL superstar, Larry Fitzgerald, accompanied by girlfriend Melissa Blakesley, were also in attendance. Fitzgerald found out about the even from good friend Jerome Bettis and he was more than happy to show support. However, he did feel the need to let us know jokingly that Jerome left him out to dry by not telling him there would be a red carpet entry. To us, Fitz looked as good as he always does but it was clear he felt he could have looked even better. When does Larry not feel like he can improve at something? It’s why he’s one of the most liked athletes in sports. Blakesley was excited see the fashion show and was also there to support her friends Ashley Brown, co-founder and wife of Ray Brown, and Ericka Lassiter, President and wife of the late Kwamie Lassiter.

Today would be Lacey Leonard’s first time walking down the runway. We spoke to her husband, retired NFL player Louis Leonard, and their two children. They were very excited to cheer on Mrs. Leonard. Louis wasn’t sure if he would be able to control his shouting and applause as he saw his beautiful wife walk down the runway. The family was very stylish, all dressed in full suits. Lleyton said his mom picked out both his and his brother Landon’s suit. Landon was sure to let us know that while his mom did pick out his suit, he picked out his own chain. It had a sparking number 23 pendant – for the goat, Michael Jordan, of course!

Once indoors, guests were greeted by Mayor Keisha Bottoms and treated with drinks and hors d’oeuvres. Fashions included designs by: Spanx, Alice and Olivia, Luna, Billy Reid, Etro, and Tods. In the beginning the models were visibly nervous, but as the show went on the nerves turned to confidence and their individual flair came out to have fun. The encouragement, applause, and cheers from the crowd made these gorgeous women’s smiles shine even brighter. They all did an amazing job displaying the fashion; some women looked as if they had been doing this their whole lives. A few of the husbands joined their wives during the final walk of the show, even choreographing poses at the end of the stage.

To end the show, Ericka Lassiter was escorted down the final runway by her son. She received a standing ovation and was tearful from the overwhelming response from the crowd. Support, love, and empowerment was felt throughout the room. It was the perfect ending, to a perfect event.