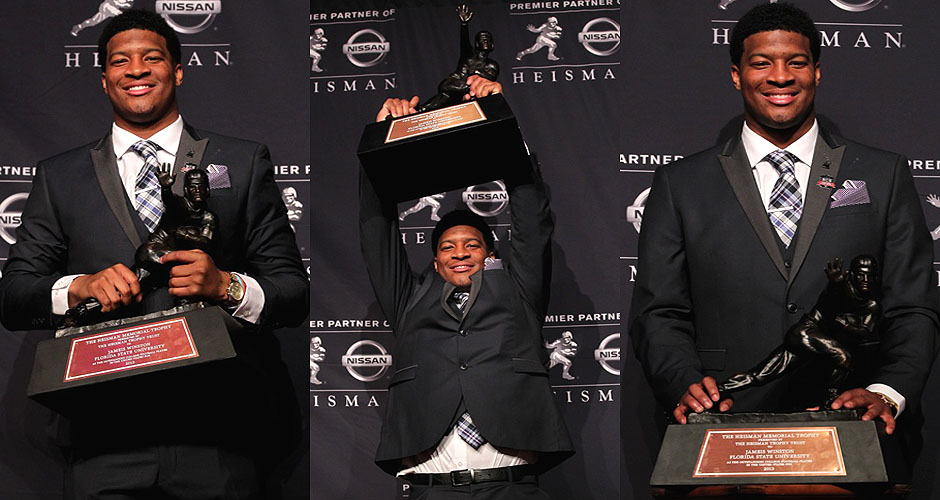 Just a few weeks away and things still seem very unsettled along the Top 10 picks of the 2015 NFL Draft. Players are visiting teams, coaches are still attending school pro days, and the drafts boards are closer to being finalized. But questions do remain.

After that things get murky quick. Tennessee, with the second overall pick, faces a big question on who to take. The Redskins, who finally have a first-round pick again now that the Robert Griffin III trade has finished, has acknowledged they are looking to trade down.

With so much in flux, it comes down to us breaking it down for you with our second mock draft of the season. Let’s see what has changed from our first…

1.) Tampa Bay Buccaneers: Jameis Winston, QB, Florida St.
As previously stated: this is a no brainer.

2.) Tennessee Titans: Marcus Mariota, QB, Oregon
This is a HUGE decision for head coach Ken Whisenhunt and company. Do you go with the Heisman Award winning quarterback or (arguably) the most sure thing in the draft in defensive tackle Leonard Williams? The second overall pick on a 3-4 end sounds a bit too pricey. We are going with Mariota in this mock draft.

4.) Oakland Raiders: Amari Cooper, WR, Alabama
GM Reggie McKenzie comes from the Green Bay Packer tree of team building. He is all about proven, quality talent via the draft. No receiver in this draft is more proven than Cooper and he wil give quarterback David Carr a true number one option.

5.) Washington Redskins: Brandon Scherff, OG, Iowa
They’ve talked about trading down and NEED to. After years of slim pickings in the draft, they need to load up. However, if they stay, like in this mock draft, Scherff gives major stability to the interrior line. Both RG3 and running back Alfred Morris will be happy.

6.) New York Jets: Dante Fowler, OLB, Florida
With the shake up at the top, Fowler falls into the happy hands of first-year head coach Todd Bowles. Bowles is building an absolute monster in New York and Fowler finally gives them that serious pass rush threat off the edge.

7.) Chicago Bears: Kevin White, WR, West Virginia
The trade of Brandon Marshall has left the cupboard very thin. New head coach John Fox and offensive coordinator Adam Gase were used to a myriad of weapons while the duo were in Denver. Adding White would develop a nice tandem with Alshon Jeffery.

8.) Atlanta Falcons: Vic Beasley, OLB, Clemson
Beasley is a dynamic linebacker in the mold of Von Miller and Bruce Irvin. Which is fantastic for new head coach Dan Quinn, who coached Irvin while in Seattle. This pick stays the same.

9.) New York Giants: Shane Ray, DE, Missouri
Jason Pierre-Paul is only on the books for one more year and has not been the consistent threat he once was. Ray can take over for JPP as the primary pass rush threat for the G-Men.

10.) St. Louis Rams: La’el Collins, OT, LSU
Despite drafting a lineman in the first-round last year, they still have some gaps. Jake Long was cut and Joseph Barksdale, Davin Joseph, and Mike Person were allowed to test free agency. Collins can play tackle or guard.

12.) Cleveland Browns: Danny Shelton, DT, Washington
Okay, maybe there are two definite things in this upcoming draft. Winston to Tampa and Shelton to Cleveland. This isn’t just mock draft consistency. Value and need are a perfect blend as coach Mike Pettine continues to build his 3-4 defense. Shelton is the rock up front to build the rest of the defense off of.

13.) New Orleans Saints: Randy Gregory, OLB, Nebraska
A positive drug test for marijuana at the NFL Combine is a direct result of Gregory falling in our second mock draft. After the NFL’s tumultouos year of public relations in 2014, image is no very important (just not in Dallas). The Saints can handle controversy as proven by the BountyGate Scandal.

14.) Miami Dolphins: Trae Waynes, CB, Michigan St.
The Dolphins have done a fantastic job of adding pieces via free agency, however they still have a huge need at cornerback. Only Brent Grimes is a legitimate starter. Waynes gives the Dolphins a tag-team in the secondary that could handle the weapons in the AFC East.

15.) San Francisco 49ers: Eddie Goldman, DT, Florida St.
Goldman, had a great performance at his pro day and with all the hits the Niners defense took this offseason Goldman would be a huge addition and a nice jolt of youth as veteran Justin Smith already has one foot out of the door.

16.) Houston Texans: Breshad Perriman, WR, UCF
A big spike for the raw proscpect out of Central Florida. Perriman has all the talent in the world and just needs to fine tune his skills. With DeAndre Hopkins and the addition of vets Cecil Shorts and Nate Washington, Perriman can develop with no pressure.

17.) San Diego Chargers: Bud Dupree, OLB, Kentucky
Defensive coordinator John Pagano likes to rotate his pass rushers to keep them fresh. However, Dwight Freeny is not coming back and Jarrett Johnson retired. Not to mention Melvin Ingram, while immensly talented, has not been able to stay healthy. Dupree is another threat teams will have to worry about.

18.) Kansas City Chiefs: D.J. Humphries, OT, Florida
Humphries will be an interesting prospect to watch come draft day. In this mock draft, we have him going to a needy Chiefs team. This selection could allow Eric Fisher to finally stay on the left and get used to it.

19.) Cleveland Browns: Andrus Peat, OT, Stanford
The Browns need help on the offensive line too. Peat is a perfect bookend to stallwart Joe Thomas. Peat, could be a Day One starter and give whoever the quarterback is plenty of time in the pocket.

20.) Philadelphia Eagles: Landon Collins, S, Alabama
The Eagles added two solid cornerbacks in Byron Maxwell and Walter Thurmond via free agency. But after they lost Nate Allen to the Raiders via free agency, they virtually have no safety. Collins starts Day One.

21.) Cincinnati Bengals: Malcolm Brown, DT, Texas
This is a luxury pick. The Bengals don’t have any immense needs and thus can spend their first-rounder on the best available. At this point in our mock draft, Brown is the best available. Geno Atkins hasn’t seemed the same since his ACL injury and Domata Peko isn’t getting any younger.

22.) Pittsburgh Steelers: Marcus Peters, CB, Washington
Peters is a hugely talented but also has some big red flags after being dismissed from the Huskies last season. His gametape speaks for itself, he just needs good coahing. Mike Tomlin can provide that.

23.) Detroit Lions: Todd Gurley, RB, Georgia
Gurley, seems to be making big strides in his recovery and will contribute to whatever team that drafts him which is good news for coach Jim Caldwell if things shake out like they do here. Joique Bell is a serviceable runner to fill in until Gurley is ready.

24.) Arizona Cardinals: Melvin Gordon, RB, Wisconsin
Gordon has the skill set to really thrive in coach Bruce Arians system. He can be a thousand-yard rusher and catch the ball with ease out of the backfield. Plus, he will take some pressure of whoever is quarterbacking the team should injuries strike again.

25.) Carolina Panthers: Ereck Flowers, OT, Miami
Last year the Panthers decided to not address their tackle needs after long-time starter Jordan Gross retired. I think they make ammends for that lapse in judgement this year. Flowers could evolve in to a premier tackle on either side.

26.) Baltimore Ravens: Jaelen Strong, WR, Arizona St.
Strong, caught everything at his pro day. He has all the tools to succeed at the next level and is a perfect fit for Baltimore. A great compliment to Steve Smith and a pair of sure hands for Joe Flacco. Most importantly, no off-field issues to worry about.

27.) Dallas Cowboys: Arik Armstead, DT, Oregon
Armstead is the smallish-type tackle that fits perfectly into Dallas’ Tampa 2 style of defense. They lacked any true playmakers along the defensive line last year. Armstead could change that along the interrior.

28.) Denver Broncos: T.J. Clemmings, OT, Pittsburgh
Their lack of bookend to Ryan Clady really showed last season. Guard Louis Vasquez had to slide to tackle and center Manny Ramirez shifted to guard. The addition allows everybody to shift back to their natural positions and Peyton Manning will be well protected again, an absolute necessity at this point.

29.) Indianapolis Colts: Jalen Collins, CB, LSU
This is a tricky pick for the Colts. They need to beef up their d-line but they also need to add someone to play opposite Vontae Davis in the secondary. In this mock draft, Collins gets the nod. They are close to a Super Bowl birth, but to make it happen they need to defend against the best quarterbacks the NFL has to offer.

30.) Green Bay Packers: Kevin Johnson, CB, Wake Forest
The Packers lost two vital cornerbacks in Tramon Williams and Davon House thanks to free agency. That will move Casey Hayward to start opposite Sam Shields and no one is left to play nickel. Johnson could develop into a star, was a four-year starter.

31.) New Orleans Saints: Dorial Green-Beckham, WR, Oklahoma
The Saints got this pick from the Seahawks by trading away their best target in the passing game, Jimmy Graham. They also traded away speedster Kenny Stills. Drew Brees needs someome to throw to. DGB has Graham size and Stills skills. The Saints have the locker room leadership to keep the star receiver in check.

32.) New England Patriots: Cameron Erving, OG, Florida St.
Last season Erving took over center duties for the first time after the Seminoles lost center Bryan Stork to the NFL Draft. The Pats drafted Stork and he helped stablizie the line. Shiftin Erving back to his natural guard position and once again playing with his old college linemate will make for an easy transition.