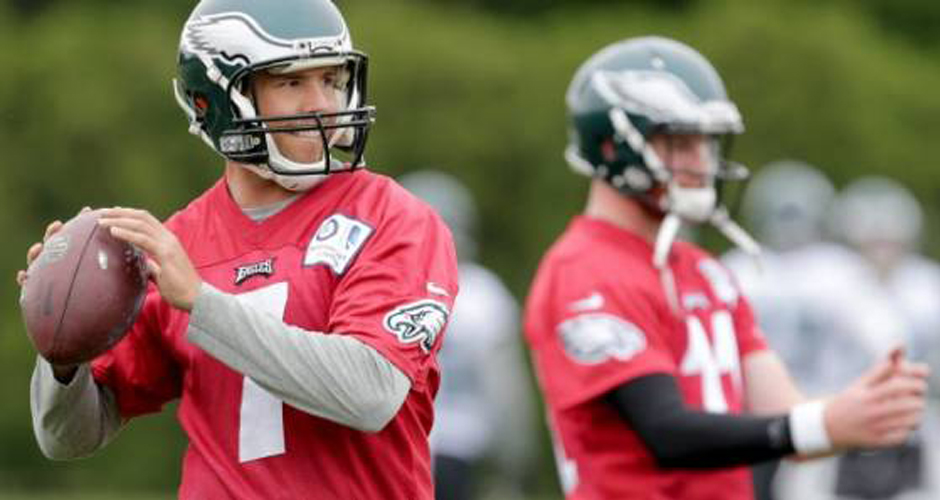 It’s no secret the NFL has evolved into a passing dominated game.  Because a prolific aerial attack seems to be the model for success in today’s league, teams are willing to make huge financial investments in franchise quarterbacks.

The Philadelphia Eagles did just that in March, re-signing their gunslinger – Sam Bradford – to a 2-year, $36 million deal ($26 million guaranteed).  At first glance, his $18 million a year places him on the same level as Pro-Bowler signal callers Alex Smith (KC) and Tony Romo (DAL).  The difference in the contracts is not monetary, but rather one of commitment. The Eagles are only tied to Bradford for two years, a much safer investment than Smith’s and Romo’s respective 4 and 6 year deals.

The former number one pick is still just 28, and penned the deal with the hopes he could prove to management he is worthy of a more long term contract. Bradford explained at a press conference “I wanted to play well for the next two years, create that stability and then sign a longer-term deal and stay here for the rest of my career.” But the Eagles are simply not convinced the talented, yet injury prone Bradford will be their best option down the line.

The idea that the former Heisman Trophy winner is not in their long term plans was reaffirmed on draft night when they traded up to select Carson Wentz at number two overall.

Once Bradford realized Eagles’ management had seemingly made up their minds he may not be their guy for the future, Bradford formally requested a trade.  As if that was not unsettling enough for Eagles’ fans, he also chose to prolong his offseason and skip voluntary workouts, raising questions about his character and professionalism.

After two weeks of working out privately and ducking the media, Bradford seems to have had a change of heart.  Still the top quarterback on the depth chart, he is now back with his teammates preparing for the upcoming season.  When asked about his request for a trade, Bradford told the media “He (Condon) thought that was the best option, and then after those two weeks, we realized that this is the best place for me to be.”

According to him, the change of attitude occurred while he was away from his teammates.  Bradford understands that with new head coach Doug Pederson now at the helm, it is vital he trains with his offensive line and wide receivers as they learn a new system.  Speaking of the Eagles’ new coaching staff, Coach Pederson has assured Bradford he will be under center come week 1.

Coach Pederson: I expect Sam not to look over his shoulder. I expect him to look forward. That’s the message I gave to him. He’s the guy.

As training camp throttles up and the preseason approaches, only time will tell if that promise holds. One good sign for Bradford has come from the trusted hands of his favorite target, Jordan Matthews, who told reporters after practice last week

“If Sam came back and didn’t have that same demeanor, then I’d be worried. But when he comes back and gets right back to work and we go out there for practice and he’s still trying to make his throws, still trying to focus on the things he needs to focus on, that puts me in a real good place as one of his receivers.”

Despite his slightly tarnished reputation among the fans, if there’s one thing Bradford has going for him it’s support from his teammates.  Besides Matthews, notable teammates to speak out on his behalf include TE Zack Ertz and fan favorite DE Fletcher Cox.

Now that he is back in camp and seems to be at peace with the situation he finds himself in, we can shift the attention to how Bradford handles the competition from rookie Carson Wentz on the field.  Early reports show that Bradford has not lost his stride, out dueling Wentz and backup Chase Daniel from the get go.  But with the season still a ways away, I have a feeling there will be many more developments in this drama’s plot.