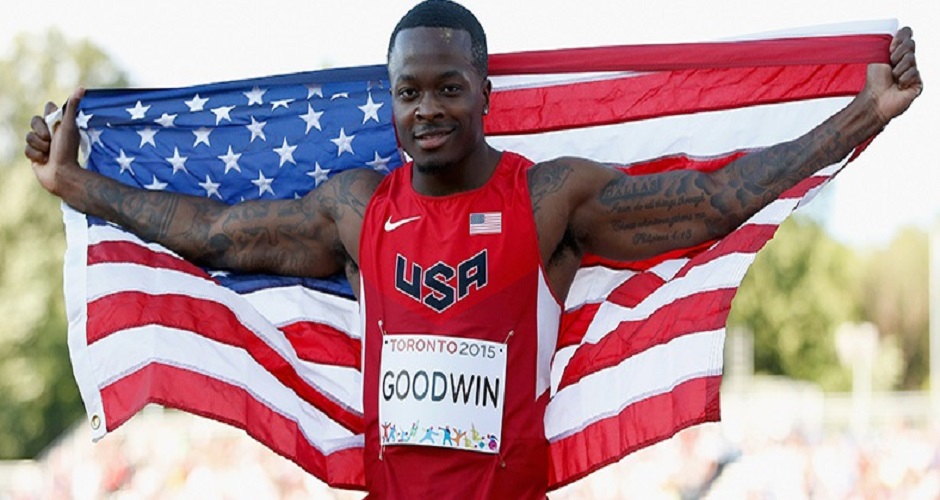 The National Football League has long been a home for some of the most talented and versatile athletes in the world.  While the vast majority display such athleticism every Sunday, a select few have ambitions of showing the world they are more than just football specific athletes.  With the 2016 Summer Olympics in Rio about a month away, we have a host of NFL talent looking to make a splash in the world’s most celebrated athletic competition.

The Buffalo Bills primary kick returner and wideout probably has the best chance at a Rio Olympic berth.  Goodwin has a long pedigree of success in both football and track & field that date back all the way to his high school and college days.  He set the national high school record in the long jump at 8.18 meters (26’10’’) and was a state champion in multiple other events.  After he was recruited to play football at the University of Texas at Austin, Goodwin decided to compete in 2 sports in college.  That ambitious choice seems to have panned out, as Marquise went on to win a World Junior Title in Poland to go with his 2 NCAA championships.  Despite his incredible success, he chose to focus on football during his senior year at Texas with dreams of the NFL within reaching grasp.  After posting the 3rd fastest 40 yard dash time ever at the NFL Combine (4.25), the Buffalo Bills selected the wideout with the 78th pick in the 2013 draft.  Goodwin competed in the 2012 Games in London, but thinks that he has grown in the years since then.  Regarding his chances at standing on the podium this summer, Goodwin told John Murphy of the John Murphy Show on Bills Radio in an interview

“A lot of it has to do with maturity.  I went in at 20 years old to the last Olympics and now I’m 25.  Just knowing the ropes, my body composition has changed.  I’m going in to have fun.  I think if you go in with a goal you’re limiting yourself.  I’m going to go in and have fun, and great things will follow.”

Goodwin is currently in Buffalo with his teammates but not participating in any football activities.  He remains training for the U.S. Trials in July where he is confident his ticket to Rio will be punched.  His 27’ 8” jump this year remains the furthest jump in the world this year, making Marquise Goodwin one of the early favorites in a stacked field.

Many people have asked the New England Patriots defensive back and special teamer why he would want to risk his future in the NFL to try out for the American Rugby Team.  Well, to put it in simple terms – for his father.  Ebner’s love of rugby easily outdates his football career.  When he was just 6 years old, he started playing rugby with his dad, his best friend.  He continued to play rugby until his junior year at The Ohio State University.  Ebner decided that he wanted to play football and ended up walking on the Buckeyes football team, an incredible feat considering his lack of experience in football.  After a stellar couple seasons, the New England Patriots took a gamble on Ebner in the 6th round of the 2012 NFL Draft.  In a featured interview with ESPN’s Chari Champion, Nate said

“I didn’t know if I would get drafted or if I would even make the team,” Ebner said. “I just wanted to work as hard as I could and make the most of the opportunity. I wanted to make it so bad, and I just put my head down and grinded. … A couple of years go by, and you get a grasp of things, and here I am going into my fifth year. It’s crazy.”

Nate Ebner has since taken a leave from the Patriots with the hopes that he can honor his father, who was tragically killed, by competing for the U.S. Rugby Team in Rio.  All reports indicate that he has the full support of his teammates and the New England Patriots Organization.

Following legends like Jim Thorpe and Hershel Walker, both Marquise Goodwin and Nate Ebner are trying to prove to the world that football claims some of the most well rounded athletes out there.  Other notable NFL players that are working towards Rio include David Wilson formerly of the NY Giants (Triple Jump – U.S.A.), Jahvid Best formerly of the DET Lions (4×100 – St. Lucia), Jeff Demps formerly of the NE Patriots (4×100 – U.S.A.), and Jarryd Hayne formerly of the SF 49ers (Rugby – New Zealand).