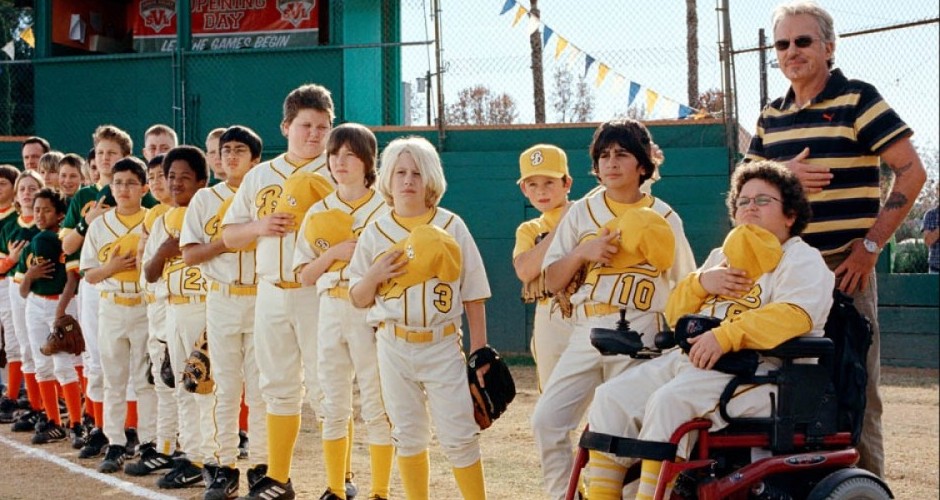 For all the bad sports movies that Hollywood puts out, every now and then we get a great team on the big screen. We’ve been given sports teams that inspired us in our adolescence and motivated us as adults. For us, it doesn’t matter that these teams never existed in reality, but only that they were able to make us laugh, teach us something, and show how a group of rag-tag misfits can come together and be something more.

The Kekambas essentially embody what every baseball team needs in character players. They have the out of place, glasses wearing, brainy kid, along with the wisecracking pitcher who’s more bark than bite. And of course, the underage tyke that just wants to be a part of the team. Oh, and the reluctant coach turned father figure of the team that brings them all together and leads them to victory. A pretty solid squad if you ask me.

This movie was a great remake of a Burt Reynolds classic. Taking only small plot points from the original, but what really helped this movie stand out was the team. Adam Sandler played the down on his luck quarterback that rallied the prisoners to stand up to the unjust guards in a gridiron showdown. With a collection of memorable characters, like the fleet-footed Nelly and Terry Crews as “Cheeseburger” Eddy. Who could forget his classic one-liners, “I got the fries that’ll cross your eyes, I got the shakes that’ll make you quake, I got the burgers that’ll…man I just got burgers.”

Another remake of a sports comedy classic, this film placed Billy Bob Thornton in a role audiences had been accustomed to seeing him in. As a morally bankrupt, crude, and foul-mouthed individual, he was a true embodiment of the hooligans he was leading. And even though the Bears didn’t win in the end, it suited them just fine. Reveling in the face of defeat and claiming that they don’t need a trophy to validate their victories. They define the meaning of “bad news” as a force to be reckoned with on and off the diamond.

Capitalizing on the absurdity of obscure sports that have professional leagues and tournaments, the film can almost be viewed as a satirical take on the growing sports community at large. That aside, Vince Vaughn and Ben Stiller have a great way of creating characters and bringing them to life. Vaughn continues the trend of being the less than inclined leader to a bunch freaks and geeks. But the team has heart and tells a story of how even the losers can rise above their own failings and prevail over megalomaniacs.

For the uninitiated, I’m talking about the Backyard Baseball video game characters. You can laugh all you want, but these kids were dangerous in their own right. Everybody’s first pick was always Pablo Sanchez aka the “Secret Weapon” because not only could he hit a ball over the fence, but also he could also throw a mean heater. And if you were looking for speed, than look no further than Pete Wheeler. The redheaded simpleton may not have been the sharpest tool in the shed, but he was definitely the fastest. The Backyard crew moved on to play other sports, like basketball, football, and soccer but they’ll always be remembered as baseball brats.

Speaking of brats and underdogs, we can’t forget about the clutch peewees known as the “Little Giants.” Each character gave us something we could takeaway as viewers and lovers of sports. And some are cheesy and fluffy, but others prove to be inspirational.

Becky “Icebox” O’Shea showed us that girls are as tough as guys even when it comes physical sports like football. Nubie, the kid-genius playmaker, gave us the legendary “Annexation of Puerto Rico” play. And Rashid “Hot Hands” Hanon gifted the world with the “Hot Hands” touchdown dance, which is still used to this day in professional football.

A classic Adam Sandler flick that shows the journey of Bobby Boucher, a socially inept hydration enthusiast with a speech impediment, and his transformation into an all-star hard-hitting linebacker. The cast includes Sandler film regulars, such as Peter Dante playing the apprehensive quarterback that constantly taunts Bobby and Jonathan Loughran as the cross eyed slow talking teammate that warms up to Bobby. With other great cast members to complete the team, like Henry Winkler as Coach Kline, the team brings the importance of working together and overcoming your fears through visualization and action.

3. The Washington Sentinels –“The Replacements”

Another Keanu Reeves sports movie, can you believe it? Regardless of whether or not you like Reeves, you should understand why the Sentinels make the list. A team that was legitimately thrown together with would-be athletes and has-been players, the sentinels were diverse to say least.

This included a chain-smoking Welsh soccer player as the kicker, a deaf receiver, a SWAT Team berserker for a linebacker, and a Japanese sumo wrestler named Jumbo as an offensive tackle. Leading the team was Shane “Footsteps” Falco, a failed quarterback looking for redemption. Needless to say, this led to some instantly classic in game huddle speeches, “Pain heals, chicks dig scars, glory lasts forever.” Some riveting stuff.

This movie brought us one of the greatest and most memorable rag-tag group of young miscreants since “The Goonies.” The team was complied in a way that shows how each of them brought something charming and unique to the table that it’s hard to pick a favorite.

They had the all-star, Benny “The Jet” Rodriguez, the newbie, Scotty “Smalls”, the trash talker “Ham” Porter, and the amorous smart aleck Michael “Squints” Palledorous. As small time as they were, they conveyed a sense of pride in placing value on having fun. This not only led to some unforgettable moments, but the way they carried themselves as a team and as friends, was an appealing aspect that resonated with many.

An extremely underrated film that gets better with each viewing. The hilarious, and often gratuitous, interactions Will Ferrell’s character, Jackie Moon, has with the rest of the team, makes this movie worthy of multiple viewings. With great player character names like Coffee Black aka Downtown “Funky Stuff” Malone, Twiggy Munson, and Scootsie Double Day.

Players fed off their interactions with Jackie Moon and Woody Harrelson’s character, the washed up Ed Monix, led up to some memorable moments. One such moment was the fictional story of how the alley-oop was invented, or the retelling of ABA and NBA merger. But comedy aside, what was so inspiring about this team was that in the end, they were not playing for anything other than pride. No matter if they won or lost their final game, there was no “next game” for the team. Even without incentive or motivation for the future, they manage to come out on top.