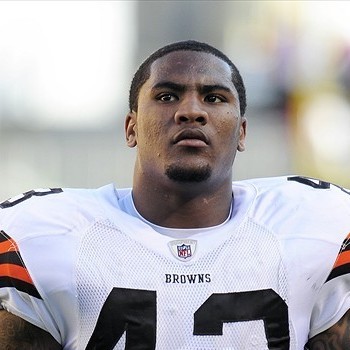 TJ Ward recently finished his third season as the starting strong safety for the Cleveland Browns after being drafted by the team with the 38th overall pick in 2010. At 5-10”, 211 pounds, TJ’s hard-hitting, and aggressive playing style has earned him the nickname “Boss Ward.”

TJ’s career in football began at prep powerhouse De La Salle High School, where he played a key role in the School’s 1992 – 2004 national record-setting 151 game winning streak. Despite a senior year injury that deterred many college scouts, TJ walked on at the University of Oregon. Red shirted in 2005, TJ earned a position as a two-year starter for the Ducks by the time his college career closed in 2009.

TJ was the first rookie to start a season opener since 1988, and the first Cleveland Browns’ rookie to intercept more than one pass in a game since 2001. In his most recent 2012 campaign, TJ again proves proficiency at both run-stopping and pass defense earned him a spot as the number one strong safety on Peter King’s All-Pro Team. As an excellent cover safety who also loves to blitz, TJ returns to the Browns as an integral part of Cleveland’s secondary in 2013.

Growing up in urban San Francisco, CA, TJ realized success through hard work and dedication. His experiences have taught him to highly value intellect, instinct, character, morals, family, loyalty and the team spirit. In an effort to give back to the community that has taught him so much, TJ started the TJ Ward Foundation. The TJ Ward Foundation develops and supports programs that provide young people with the tools needed to become strong, responsible young men and women. By identifying specific populations of youth in communities across the country, the TJ Ward Foundation focuses on education, family values and community service.

His foundation has been able to help provide scholarships for underprivileged youth to attend his camp, donate turkeys to hunger centers during Thanksgiving, and send kids from local Children’s Homes on all-expenses-paid Holiday shopping sprees. Ward is an active member of the Cleveland community on and off the field.