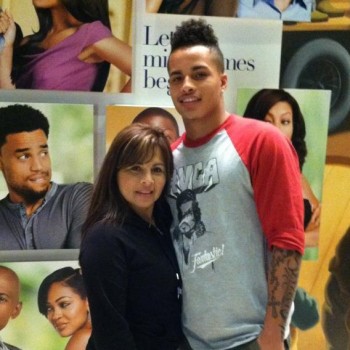 Annette Delao has resided in Encinitas for the last 8 years, prior she was a resident of Oceanside since 1997 with her son Kenny Stills Jr. In Oceanside, Kenny started playing pop warner football at the age of 5. She made sure her son continued to do what was needed throughout the year to achieve success. Annette made it a point to send him to football camps and combines during the summer. She would do whatever she had to do to get him to the combines around San Diego or even out of town.

She is a single mom with five children, three daughters and two sons. Kenny, being the baby in the family, was able to have more privileges and do extra curricular activities. Because of these opportunities she is now the proud mother of a rookie in the National Football League.

Kenny Stills was drafted as a junior out of Oklahoma in the 5th round (as the 114th pick) by the New Orleans Saints.

Delao was introduced to the Pro Player Insider Team team at the Rookie Premiere in Los Angeles.  She is a grandma, runner and personal trainer and is excited to join the part of the Pro Player Insider family. Annette will combine her outgoing personality, her knowledge of the game, and  share the challenges and rewards of raising a professional athlete.